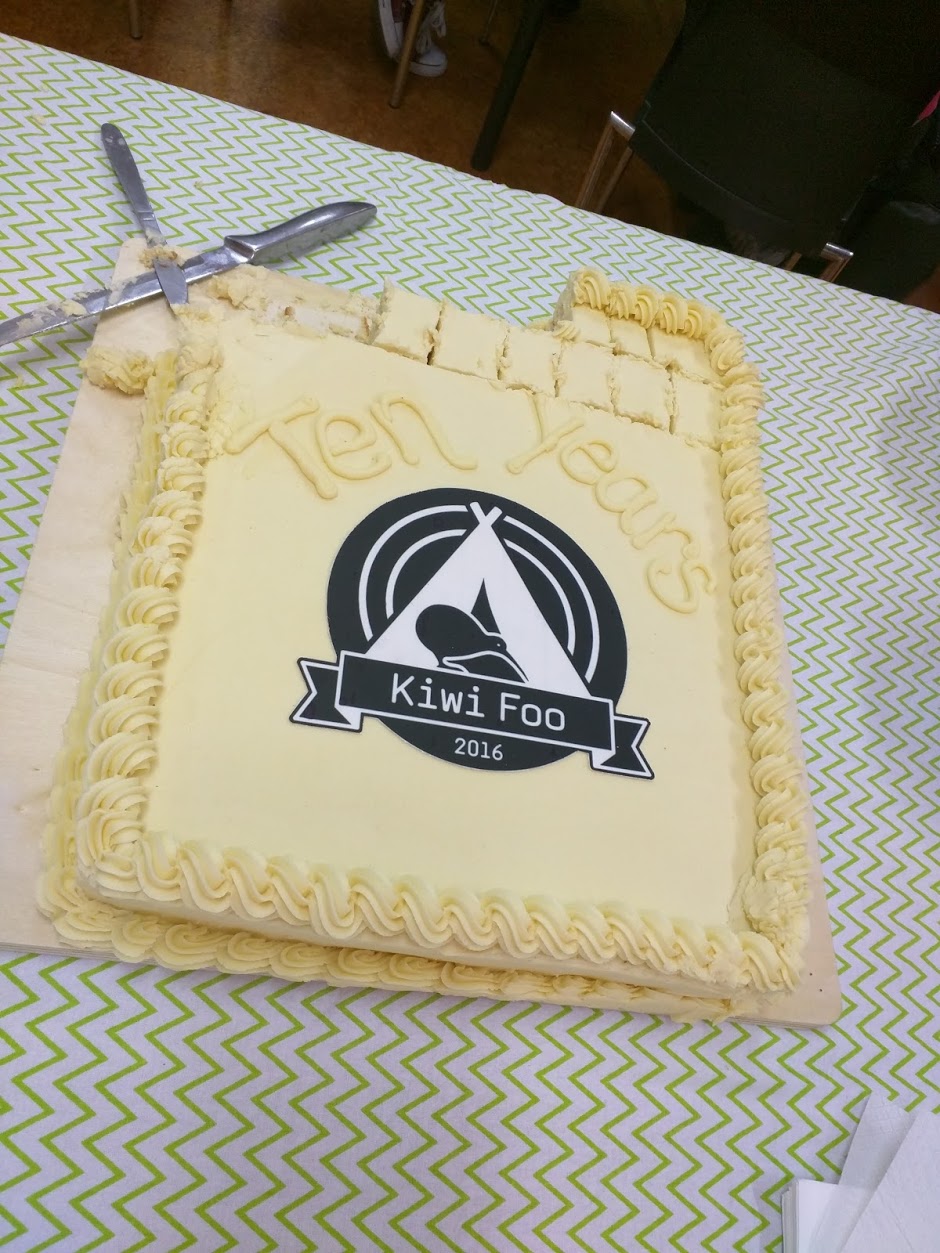 If you ever get the opportunity to attend a Foo camp, go.

Foo camp is an invite only, unconference. It’s designed at bringing people who do interesting things, together for one weekend. Perhaps people who may not have otherwise met, giving them the opportunity to discus, brainstorm, accuse each other of being a werewolf (not really, just part of the traditional game) and perhaps come up with more cool interesting things to create.

Attendees have a broad spectrum of skills and interests, creating one big melting pot of ideas and opinions.

This year, I was fortunate enough to be invited to Kiwi Foo (Baa) Camp. Second year in a row! I felt pretty lucky indeed.

This year also happened to be Kiwi Foo camp’s 10th camp! Which brought about a change in venue – from Mahurangi College, to Snells Beach Retreat! With actual dorm rooms!

My friends, Felicia and Patrick , were also invited. So we got up ridiculously early and drove from Wellington to Snells beach. Just a casual 11ish hours drive.. I was knackered by the time we checked in. After catching up with a few familiar and some unfamiliar faces, I added a session to the session board and hit the hay. Hoping to rejuvenate some energy for the following day and a half of exciting topics and discussions.

Foo camp comes with what’s called “FrieNDA”, which is what is discussed is assumed to be in confidence, “What happens at Camp, stays at Camp.” A lot of people who attend foo camp may be privy to information that is otherwise unavailable to the public, but highly relevant to a session they’re attending. And because we don’t all sign a NDA on arrival, the “FrieNDA” is enforced. I have kept the “FrieNDA” in mind when writing this post and only wish to convey the ideas and topics that I found interesting from the camp, not information.

The first session I attended, I actually left within the first 5 minutes – but that’s OK! One of the things I like about Foo camp, is that they encourage you to use your feet. If a session is not what you expected, or you don’t think you will get any worth from the session, you are encouraged to get up and leave. Speakers or session organisers are reminded that they should not be offended by this. The weekend is for everyone and everyone needs to get as much out of it as they can.

But back to why I left the first session. The session was pitched as some new microcontroller, so I was really excited to see what it was, what it could do and how it was different from the everyday arduino boards. Turns out – it was an arduino knock off, being recreated for next to nothing and shipped in from China. I didn’t feel I would learn anything new from this session and I later found out that the attendees learnt how to make LEDs flash, so it was definitely something I didn’t need to stick around for. But after discussing it with my friend, ethically, it just didn’t seem right. It was the organisers intention to buy these cheap knock offs from China and create small starter packs for school children as a way to introduce them to programming electronics. I certainly like the idea of teaching children electronics. But I don’t think it’s right to undercut the original with a cheap knock off.
It’s like purchasing a cheap pair of shoes. You think you’ve found some amazing bargain! But what was the process of making those shoes that has made them so cheap? Check the “made in <insertCountryNameHere>” tag next time you buy that cheap pair and think about the quality of life the person who created those shoes might be going through if that’s all you had to pay for them.. I’m using clothing as the example here, because this exploitation has been strongly highlighted before, but it’s the same across other industries, including electronics (the destruction of electronics is even worse, but let’s save that rant for another day).

The next session I walked into seemed to be a room full of managers trying to cope with letting people go. Most of the people who spoke had gone through the restructure process at least once and wanted to share ideas around their approaches to letting people go. Saying how identifying the purpose or clarity is incredibly important. But also that the people who remain, need to *want* to be there. The remaining team(s) need to have trust. Trust is so important. People need to put aside their personal conflicts and want to be there, want to contribute and want to improve. I’ve been through two restructures now – surviving both, but they’re never easy for anyone. One thing that resonated with me that the group brought up, was people who have a toxic attitude. People who are not happy with their current environment tend to be toxic, and that toxicity ripples through to other people. I don’t like when people are negative. I don’t like when they rip on the business I’m trying to help improve. And I especially don’t like it when the people ripping on the business, are still working for the business! Everyone else just wants to get on with it and get the job done. But the negative/toxic individuals, bring others down. Aside from restructures seeming to start the trend of people leaving, negative people help continue this trend too.
Someone gave an example of when they had been in a situation where one of their employees had become quite obviously unhappy with their current employment. Their approach was to have a private meeting with the employee, and ask them
“Are you happy here? Do you want to be here? Because if you don’t, I will help you any way I can to find something better for you, so that you can move on”. I would like to see this openness more in the work place. Because if you are unhappy, you shouldn’t feel like you can’t at least ask your manager for a recommendation to help you find happiness elsewhere.

The following session made me quite depressed. “Implications of AI in a post singularity world”. Basically, when the robots become self aware and no longer need us, what becomes our purpose? What becomes of us? What do we do each day, when the jobs we would have been doing are replaced by robots? Will the robots decide there is no purpose for us to exist? Will they see humans as the ultimate threat and try to destroy us?
So how do we manage this? How do we keep jobs and keep our society functioning while more and more jobs are made redundant? Could we introduce a universal income, where everyone is paid exactly the same amount regardless of age, race or gender? Where would the money come from? Would we be able to create a welfare system so robust that it could sustain all of us?
So many questions… So many grim outcomes. I really hope that by the time we’re in a post singularity stage of our existence, that we have made a serious paradigm shift in how we find worth and value in what we do.

Next I attended a session around user research. In the software development space at least, knowing how to appropriately engage your target audience is vital to gaining exactly what they really want from your product. We discussed how questions should be worded to make them open ended and help prompt the user for more information. Some of the points I took away were:

During the session, I was asked as an interviewee, when was the last time I needed to source new knowledge and how did I gain it? I referenced a time at work when I had actually sourced a Enterprise Architecture Framework book. But not from a book shelf, from a colleague. From there we assessed how did this colleague know I needed that particular book to solve that issue. Ultimately it came down to the “greater magic” (as my interviewer put it), that the environment encouraged collaboration and discussion around our work. I figured it was probably because we have a pretty sweet coffee machine in the office kitchen that gathers most of us when we’re stuck on an issue.

Later in the day, I helped run an Open Source session. There were ~4 of us that were intending on running a session around Open Source so we decided to combine it into one big discussion. Nearly 50% of the attendees were from software development industries, but closely followed by those in science and research fields. From that, it sounded like most of the pain points were from those involved in science and research. They all face issues with publications and ownership of information when it’s not publicly funded. After a while, it felt like we were all preaching to the choir about how great open source is, but we were missing something key, something that I wanted to gain from the session. How do we reach those who don’t know how to contribute or don’t know that it is available?
Obviously the entire room understood the importance of open source. So I asked them if they were to ask their family what open source was, would they know? Or if they knew how to contribute to it, could they? Most of them shook their head. They would not know. That’s our fault.
We need to spread the word. We need to help and contribute! We need to identify what the barriers to entry are and enable more open access in what we do.
This ended up being the only session I attended where we each walked away with something to follow up on. We were tasked with becoming more involved and spreading the word. As an example of how to get more involved, I explained that I volunteer for FutureInTech, a government funded initiative that helps facilitate people in the STEM industries with students and teachers. It’s a way for people to explain what they do in their given industry to help give students some insights into what it takes to make a career in that industry. There’s also other sessions that I help run in particular that relate to software development and writing code. My goal to follow up on was to increase the amount of schools I visit and to make more of an effort to explain what open source is and demonstrate how they could contribute to open source projects during these sessions.

There were many other insightful sessions, including a fantastic overview of the new Harmful Digital Communications Bill by Judge David Harvey as well as many other wonderful dinner table and coffee discussions.

Friends were made. Projects were proposed. And once again, I came away feeling overwhelmed, inspired and humbled by the amount of amazing people I had the privilege of spending a weekend with.

If you ever get the opportunity to attend a Foo camp, go!